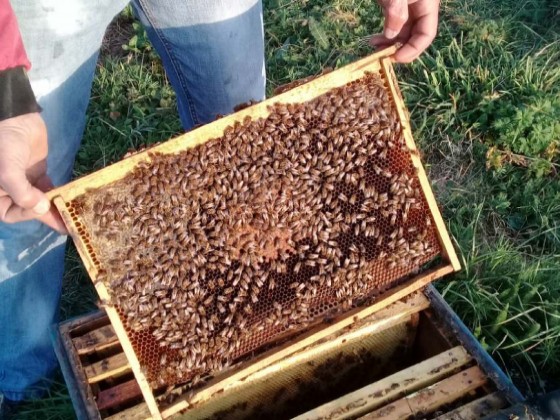 Beekeeping is one of the ancient branches of agriculture in The Republic of Armenia. The climate and setting here allow developing beekeeping. Vast forests, flowery meadows are the main factors for the development of apiculture. Honey collecting in such nature is organic and healthy.  Because of this factors there are lots of beekeepers in our area, who are

occupied with apiculture either in amateur or professional level.

Saribeg Gasparyan, a client from village Lusakunk of Gegharkunik Province, has being occupied with beekeeping together with his sons since 2000. At that time the client had only 40 beehives and the product was realized only in the village. In 2017 the client enlarged his activity - 90 beehives, new founded  PE due to  ECLOF UCO LLC financial support. As a

result of this advance the client had honey market opportunities and could increase the income. Due to the income derived from beekeeping the client could buy 2 hectars land as a bee-garden, afford for the education of his sons, and supplied good living of his family. Now the client has already 120 beehives due to ECLOF UCO LLC.

From March to April depending on plants blossoming season the beekeeper travels with his hives from place to place  for better results. Harvesting of honey takes place once a year from July to August. The main honeydew sources are sainfoin, sea, astragalus, thyme, thistle, wild mint, etc. The honey got in this way is considered to be polyfloral. According to

laboratory experiments the honey products are in full compliance with qualification requirements. As a result of this the product is considered to be organic and qualified one.

The client with his family is completely engaged in this activity and he does his best to learn more about apiculture. One of the secrets of his success is the professional treatment towards the favourite work combined with devotion and hardworking temper.

Not only the settlers in this area are familiar with the honey product sold by Saribeg Gasparyan, as well as the people from various parts of Armenia come to this place to get the product. The guests leave with the expectation of tasting this honey next year, too. Because of high demand of the product, the number of clients has tendency to grow year by year. That’s

why he has enlarged his business.

In 2019, with the support of ECLOF UCO LLC, Saribeg Gasparyan had an opportunity to take part in agricultural fest, where he both realized bee product, attained new partners and got offers to export the product.

Vardasar LLC is a client of ECLOF UCO LLC since 2013.

The company started its activity before ECLOF crediting. The borrower established a technique and equipment store near his own house. An time over, noticing the absence of hotels and guesthouses in Vardenis city, the director of the company initiated the establishment of a guesthouse in Vardenis, thus developing and improving hospitality activities in the city.

The first loan was 5,500,000 AMD. With the support of ECLOF UCO LLC and SME Support Fund, the director of the company started the construction of the guesthouse. As a territory of his business, he uses the second floor of his own house.

Later, the funds for the next stages of the borrowing were also being invested in the development of the guesthouse.

The guesthouse does not have any other employees, it is a family business that involves all family members: the borrower, his wife, borrower's father and mother.

Today, the guesthouse is expanding its scope of work. Ahead of summer season a large improvement work is carried out in the yard: open seats are set up, and there was also opened a fast food café with the means of guesthouse profit.

And the loan amount of AMD 3,000,000 received by the latest loan was used to get solar panels for solar energy.

The profit earned is invested both in the development of the company and, accordingly, changes the borrower's lifestyles.

As a result of hard work, today, the director of Vardasar LLC and his family live in more prosperous conditions - they have the opportunity to spend their holidays, as well as acquire apartments in the capital Yerevan.

The borrower mentioned in his speech that besides the financial support, they have got a great humanitarian support from ECLOF, and noted that the goal they have reached today is only the result of ECLOF UCO LLC support.

Ashot Sargsyan, a resident of Lusakunq village in Gegharkunik province, is engaged in ironworking in his own yard.

Starting from 2017, he is an ECLOF client. Before using the ECLOF loans, Ashot, due to his hard work, has been able to take care for his family of six members.

However, as a result of receiving and wisely using the borrowing of AMD 1,500,000, Ashot was able to expand its activities, he has built a workshop in his yard and purchased necessary tools.

Receiving a loan of AMD 900 000 for the second time in 2018, he purchased new equipment, tools and materials with which he could expand the scope of his activities. Despite the fact that finding a job in the village of Lusakunq in Gegharkunik region is difficult and conditions of agriculture are unfavorable, Ashot Sargsyan is able to provide for his family's living by doing his beloved job.

Ashot is the only member of the family previously worked, and today has his son’s support, too. Any gate or iron that he got from the iron Ashot thinks as if his own creature, which he creates with great love.

Ashot Sargsyan noted that if a customer had a bad attitude from ECLOF UCO LLC or there were credit terms, the customers would not apply the second time.

In response to the borrower's responsibility and punctuality ECLOF UCO has always supported and will support the borrower.

Mayis Gevorgyan, resident of Karchaghbyur village, Gegharkunik province, is a borrower of ECLOF UCO LLC since 2013.

Before applying to ECLOF Mayis and his family was engaged in farming.

Climatic conditions and water resources of the region allow Mayis to undertake and to be engaged in fish farming.

In a short period of time, he reaches great success, but with the expansion of volumes, the costs are also increased.

In May 2013, it applied to the support of ECLOF UCO LLC to increase fish farming business and build new artificial lake. Getting a loan of AMD 3,000,000, from which 25,000 fish eggs have been purchased.

His father and brother help him, and there are already four artificial lakes. Mayis also has a large refrigerator in the backyard of the house, where fish can store unrealized fishes for later sales, as a result of which the losses are significantly reduced.

The borrower cooperates with the Sevan National Park and sells growth fishes.

Due to his incomes the borrower has purchased fixed assets and bought a 2500 m house land next to his house.

Mayis Gevorgyan qualifies the credit investments of ECLOF as a factor promoting positive changes in his life.

Rebeca is ECLOF borrower since 2016. She learned about ECLOF crediting through organized seminars in the village, where she was an active participant.

While benefiting from the ECLOF financial support, Rebeca took care of her family's daily needs by bakery, especially by baking Armenian lavash. However, Rebeca could hardly afford to care for the daily needs of her family.

And there was need of enlarging and developing the business, and for this purpose in 2016 she applied to ECLOF and received her 1st borrowing which was AMD 1 000 000.

For the most comfortable service of the customers, Rebeca used the first loan to improve the yard - the toilet was built, the ground was tiled and the yard area was landscaped.

As a result of 2nd crediting, an additional building has been constructed, which now serves as a food production and food service center.

With the profits, they built a kitchen and purchased a car, which is used for food delivery.

The borrower appreciates ECLOF support in the development of her activities. She notes that as a result of ECLOF crediting, his family lives in more prosperous conditions and desires that  the lending program to be continuous, as there is a goal to build a hotel for which a large and expanded area has already been selected but the great investment is still needed.